All that talk about camera specs and 4K, 5K, even 8K resolution. We forget sometimes that it comes down to the beauty of the scene in front of the camera lens. A big part of that is the lighting.

Is it soft, is it harsh, what are the contrast ratios? ETTR or light meter? How do you get soft lighting just like the sun when all you have are point light sources? How do you repeat your lighting set-up if a scene splits over different days?

With so many questions, we have set up a lighting workshop to explore, discover and to seek out those answers. Come join other people interested in achieving great lighting. With a wealth of lighting equipment at our disposal and subjects to shoot for test shoots in a relaxed atmosphere, come join us. We will be using a high end RAW camera to capture with.

This workshop costs just £6, cash on the day. All proceeds go to Alzheimer’s Society. Spaces limited.

For venue details and to book your place, please email:

From the people who brought you Film Means Business, comes a film industry networking extravaganza. Planet Hollywood London plays host to Non-Multiplex Cinema’s Meet-up next Tuesday evening. Come and encounter a kaleidoscope of people from the film industry over a drink or two, an event not to be missed!

Email your name(s) to get on the guest list to

Though this event is free to attend, it is a charity event, please do donate whatever you can to Alzheimer’s Society (£3 per attendee recommended).

If you want to go to an event where you can meet loads of like minded people in the film industry, in a friendly and fun atmosphere then this is the one.

We had our first Meet-up at the end of last year and it was fantastic, with over a hundred attending. The networking even carried onto the street outside, after the venue had closed for the night.

So for a sparkling opportunity to network with people from the filmmaking and acting world, come to Non-Multiplex Cinema’s Meet-up, the Relaunch, as we are now at a new venue for us, Planet Hollywood London (57-60 Haymarket, London, SW1Y 4QX), on Tuesday 7th October 7pm.

You’re going to be doing a great deed too as all proceeds (£5 to attend) goes to Prostate Cancer UK. To book a place now, please see below.

WAYout are a charity working in West Africa and the UK, running film, media and music programmes to engage street homeless children and youth, get them off the streets and into education or employment – and they are now desparately looking for donations of old or second-hand film and recording equipment and IT. These really range from Macs, cameras to HDV tapes and small headphones.

They have been running these projects since 2007, which have won awards and been hugely successful in engaging and supporting over 1,500 youth in that time. In May 2012, they opened their first WAYout Hub/studio, supported by the Strummerville Foundation, which has engaged with over 350 street youth in its first 6 months. But – THEY NEED YOUR HELP!

They have previously been fortunate enough to gain donations of G4 Macs, cameras and equipment from Southbank University, Princess Productions amongst others. But most of this equipment they have – Macs, studio equipment, cameras, tripods, sound equipment – they have had since 2007, was its self second-hand and, following a lot of wear and tear in Sierra Leone, is now on its last legs. They are desperately looking for new second-hand equipment – can you help?

Below is a list of priority items they are hoping to get – but, in short, any film, music and IT equipment would be greatly appreciated. If you would like to know more about our projects and work, please do visit www.wayoutarts.org, which includes some of their award-winning short films and music videos (made by the street youth).

Unfortunately, they will not be able to take anything that isn’t working, as they can not get things repaired out in Sierra Leone. But if you do have anything, please do let them know – either by emailing theWAYout email (info@wayoutarts.org) or by calling direct on 07939254610.

Macs able to run Final Cut Pro studio, Logic, Reason, and other music programs – laptops or stack
Cameras- they can use pretty much anything and know its the person who makes the good film, not the camera – so as long as they are decent and record on to a format they can still buy- so, pretty much any cameras.
Lights (they don’t have any, so both little portable ones or for the studio)
Mics, especially rifle mics and boom pole but radio mics too.
Tripods – preferably with fluid head but definitely strong enough for a Z1 type camera
Headphones
Small HDV tapes

ALSO – if you’re interested in volunteering with WAYout, do get in touch!

Big thanks in advance, they look forward to hearing from you.

Yellobric was set up in 2011 to enable sustainable, long-term economic growth through education in the developing world.
They enrich the lives of thousands of school children in sub-Saharan Africa, many of whom have never had the educational materials to achieve literacy. Leveraging modern technology, they deliver educational texts in a low-cost and sustainable manner to where they are needed most.

Putting a library of eBooks in the hands of developing world children for under £100.

Yellobric is currently focusing on the wide scale distribution of eLiterature as a low cost and effective way of providing developing world children with thousands of eBooks and other educational tools. These are deployed through partner charities with existing operations in schools and communities across the developing world. Yellobric has nine schemes in operation across sub-Saharan Africa. In total 49 devices have been deployed, each with a library of between 400 and 1,600 eBooks. In their first year Yellobric were able to deliver eBooks at around 40p per eBook. For more information: http://www.yellobric.com 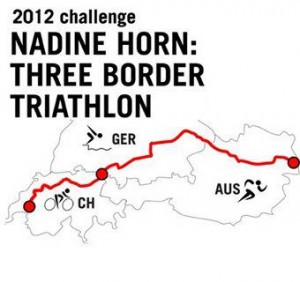 We’re delighted to let you know about this great fundraising effort by one of the Non-Multiplex Cinema team. Nadine Horn’s Three Border Triathlon. On the 21st of April she will be setting out to embark on a triathlon over three countries, cycling across Switzerland by bike (~460Km), swimming along the Danube (~550km) and running across Austria (~315Km). Her aim is to raise funds for the Danube, engage people to join and support the project world-wide by grabbing one of the cool T-shirts. It’s the combination of adventure and fundraising, documenting it along the way with an HD Go Pro underwater camera and other equipment to then share it with everyone. You can be part of it and support the Three Border Triathlon by joining the Buzz here http://forms.aweber.com/form/70/1423959170.htm, hitting the Facebook like button here https://www.facebook.com/threebordertriathlon and Tweeting about it here https://twitter.com/#!/Adventure_Nads or visit her site at: www.nadinehorn.com/threebordertriathlon