Welcome to the Non-Multiplex Cinema Films in the City Event:
WANT TO GET YOUR FILMS INTO FESTIVALS?
HERE’S HOW! 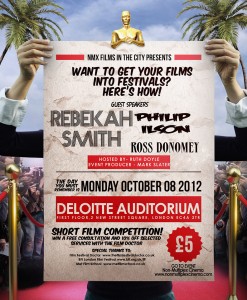 Come join us for a night of screenings of filmmaker’s submissions to NMX and networking!
Then find out how to get your film into festivals during the main-event panel discussion with The Film Festival Doctor & the Director of BFI London Short Film Festival, which will give you insight into how you can get your film into festivals and will outline the major steps to take to ensure your success.
Our guests are experts in the film festival world. They will enlighten you with their experiences and provide real-world tips and guidance to aid you in implementing your festival plans.
Have any questions needing answering on your film festival plans? Bring them, our guests will answer them during the audience Q&A! In-house host is Ruth Doyle, Producer.

The winner will be announced by Non-Multiplex Cinema & The Film Festival Doctor.
Rebekah Smith will contact the winner directly. GOOD LUCK EVERYONE!!!

BUY YOUR £5 TICKET NOW TO GAIN ENTRY TO
THE EVENT & THE COMPETITION!