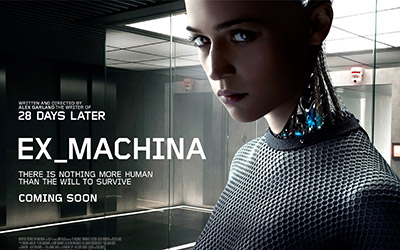 “Ex Machina is written by London born Alex Garland who is making his directorial debut. He is also known for being the screenwriter for Sunshine, 28 Days Later and Dred.”

A tense, cerebral sci-fi about two men (played by Oscar Isaac – Inside Llewyn Davis and Domhnall Gleeson – About Time) testing the intelligence, and the sexuality, of an AI inside a robotic woman’s body.

Come watch this with a band of filmmakers and film lovers on Wednesday 21st January, the next Non-Multiplex Cinemagoers Group outing. Meet from an hour before the screening at the cinema bar in London for friendly banter over a drink or two. For all the details and to register your interest to watch this, please go to the Meetup.com group here.